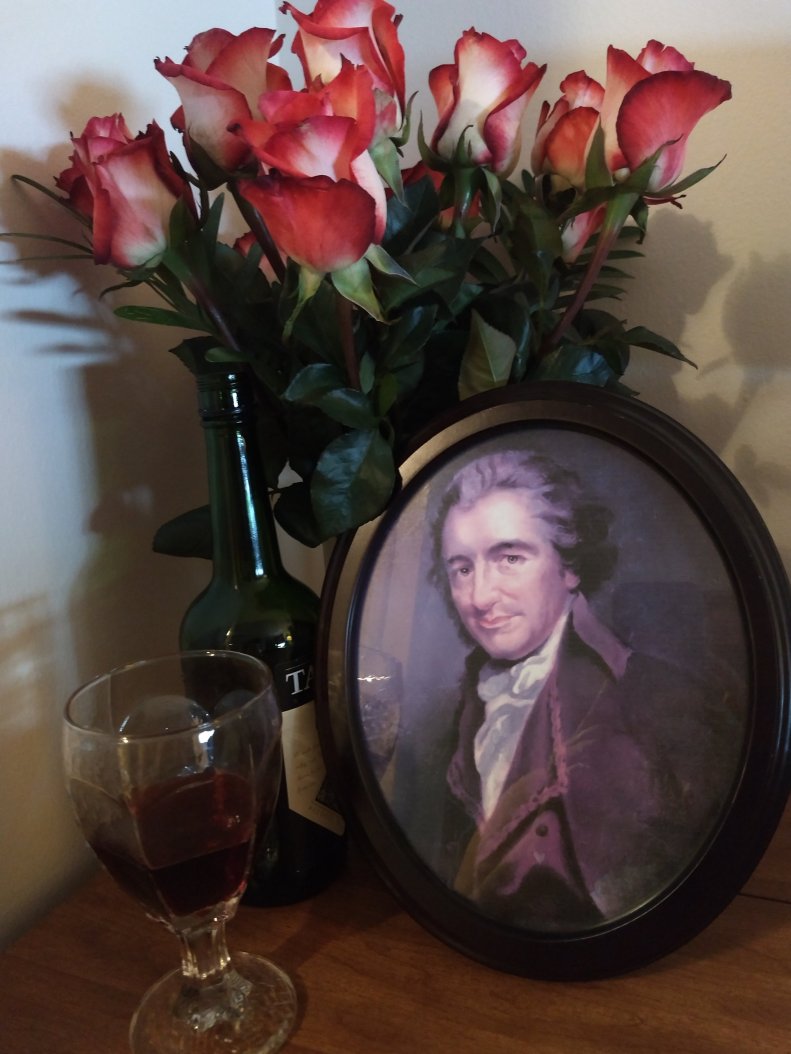 I celebrated Thomas Paine’s birthday for the first time in 2010. It was an inspired impulse, almost a whim. I bought a dozen red roses and a bottle of French brandy at the local market and took them home – where an already-framed portrait of Paine (downloaded from the internet) perched on my writing desk, right next to the computer monitor. I trimmed the roses, arranged them in a big clear-glass mug, and set them next to the picture. Perfect. Or … nearly. I fussed with the tableau until I liked it well enough to snap a phone picture of my small tribute to America’s most radical Founder. I poured myself a glass of brandy, toasted the great man’s memory, and settled down to read his work for an hour or so. The End.

Except it wasn’t the end. It was only the beginning. The hardy roses obliged me by lasting that entire week and into the next. My writing desk was next to my bed, so every morning when I got up, the first thing to engage my eye was usually my little memory-altar to Paine, and that – throughout that week and into the next – made me absurdly happy.

Of course the placement of Paine’s birthday could not have been more perfect in my view. January 29 falls roughly in the middle of the not-quite-two-months between Christmas and my own birthday in February. A low-key, self-designated holiday proved to be just the tonic for the blah (and here in the midwest, literally grey) period of “back to normal routine” after the big winter holidays. Paine’s birthday also made for a nice reflective pause in anticipation of my own birthday. But perhaps the best perk was that my marking of this day was entirely private (at first). A sweet little secret all my own. No one needed to know why I felt bubbly and festive strolling through the grocery aisles on a chilly January day, or why I was buying flowers and liquor with what felt like a silly grin on my face. No one had to know unless I decided to tell them. There was an almost illicit thrill in that. And there were no crowds of gift-buyers to jostle with, no rules to follow, no expectations to meet (or fail to meet). Nope. Just me, Mr. Paine, some beautiful words, and whatever moments of cozy reflection I could squeeze out of the day. I felt like I was making up something from scratch – a little bit like “Baxter Day” in the PBS Kids TV show Arthur.

When I learned that actually, folks had been celebrating Thomas Paine’s birthday since at least 1827 – with feasting, speeches, music and dancing (Dancing? What would the Quaker-raised Paine have made of that?) – I felt delighted anew, as if I had joined a community – a semi-secret fan club stretching back to the earliest days of the Republic.

And it seemed to me that my supposed “homemade holiday” needed to expand a little – to become, like Paine himself, a bit more public-spirited. And what better way to do that than share his words? So when I celebrated Paine’s birthday the following year, I bought the flowers and poured the brandy – but I also made a small gift of Paine’s words to the world, giving away three new copies of The Age of Reason on a book-exchange website (all of them snapped up within hours, as it happened). By 2012, it was five copies. Eventually, I was giving away not just The Age of Reason, but Rights of Man and Common Sense as well. To this day I love the thrill of sending Paine’s words off to strangers living in parts unknown.

And what words they are and how we need them – now more than ever. Happy Birthday, Thomas!